I am a visual artist, I'm more than just a photographer. Life behind and in front of the lens.

The Art of makeup is an amazing thing to me. I work with a makeup Artist her website is pamperedprincesschicago.com I was just watching her do her thing this past week trying to understand the craft of the “beauty makeover” . Somethings aren’t meant for us men and I think makeup is something that goes back to little girls with crayons and barbies…..lol.

What we see and what the camera captures is a night and day type of thing. Ever put on makeup and take a picture and was like…. “what happened to my lipstick or eyeshadow”? Well the the camera is what happened. Professional photography and makeup services gives you insight, recommendations and information that will help you get the desired look that your looking for.

The photo above is a perfect example of professional makeup application and photography combined to create an image designed to display the beauty of the model’s facial features. A different perspective was taken so that the viewers eyes can travel across her face but be drawn in to the eyeshadow.

Sup people. Today I think that I will change my pace a little bit and give love to the Chicago night club V-Live. I was out shooting a lingerie show and received a invite to this club to shoot a JM Couture fashion show. I didn’t know what to expect since this was my first time there, but BOY OH BOY it was definitely a place for young men to find the hottest latin women in the city.

I walked in the joint prepared to chill until the fashion show started, but Damn it was so many women walking around I had to give my camera another good workout. I had my cousin with me that night and he was like “don’t forget That I have to be at the shop in the morning” (he’s a barber) But as soon as we walked in he woke right up and disappeared. By that time I had my camera in hand and shooting every which way that I can. As I made my way around the club I spotted “HER” (the dancer in the image above) Staring right at me and my camera.

I made my way to her and the closer that I got the sexier the dance became. By now we were in our own world, every shake of her hips, every lick of her lips, every bounce of her ass made my camera pop, burst and flash. As she finished giving my camera what it needed she politely blew a kiss and I moved on. Totally satisfied I made my way to the stage as the show began.

I never saw her again that night but I will never forget our “special moment” it was the most ultimate mini shoot that I ever had. If your reading this post and your a photographer, seize the moment when times like that arise because “you only get 1 shot do not miss your chance to blow, this opportunity comes once in a lifetime”…… Eminem 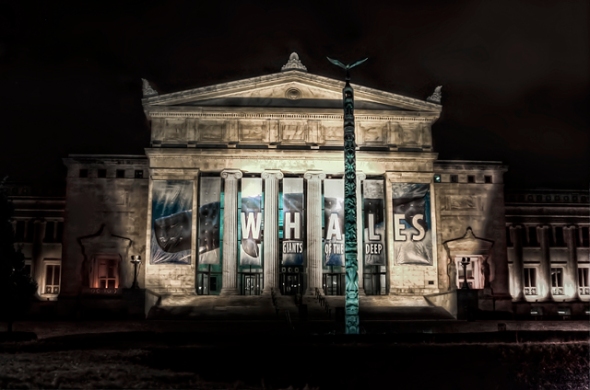 Whats up everyone? Today I was just going over a few thousand photos that I have shot and saw a few that I thought was “junk” when I shot them. Well to my surprise I have an external hard drive full of images that are the total opposite.

This shot of the Field Museum is a second shot that I took similar to another that I posted to facebook a few months back. The first shot was taken from the side of the Museum facing Soldiers Field and this shot is from the Lake Michigan facing side.

Now I totally understand about “cliche” photos, but When you love where your from and want the world to see it the way that you see it, is the best part about being a photographer. I waited for a semi clear night, jumped in my car and headed east from where I live to shoot the Shedd Aquarium.

Now anyone who is reading this from Chicago knows that parking downtown for a few hours is damn near the cost of a monthly bill at your home, so I decided to head down around 10:00pm so I could park over by the Buckingham Fountain on Columbus for free (meters only charge from 6am to 9pm over there) just so you know.

The walk to my destination was cool and it was plenty of people out enjoying the night. I knew that the park closes at 11pm so I had to move fast so I didn’t have the CPD questioning me about why I’m taking pictures of landmarks, (you know photographers are seen as the new terrorist).

Well either way I got my shot and walking away from there I stepped right into this shot…… BAM!!!!! With camera still on tripod, I shot away. After looking at this image I was like, “its alright I could’ve done better” and put it in a folder and went on with my life.

Sometimes we need to step back and take a look from a different perspective or remember to have fun doing what we do. This pic didn’t come out bad at all but I couldn’t get out of photographer mode to see it for what it is. Thanks for reading my rant and I hope that you enjoy this photo as much as I am, Peace & love and remember to BELIEVE!!!!!

Hey everyone! I have been away from the blog for a while working and getting some other things together. I am back with a new perspective on alot of things and I am about to show it off.My heart is with photography and that I want to show to the world.

My city is where I started my journey in life and my city is I will start the journey with my new perspective.

This is your brain on drugs!

Where do I start? Well some things are shown to totally degrade a race of people so let me start by saying that I am not trying to exploit anyone or any race by this post. It all started yesterday, I needed to get out and away from the house so I packed up my gear and headed out to the southside with my cousin Ell to his barber shop. Now this isn’t the best nor the safest place in the city but entertaining for someone like me who lives in an area that is well maintained by the homeowners. I learned yesterday that this neighborhood is called the new “boystown” and its a trip to see so many thugged out homosexuals. Outside of that there are a lot of “dopefiends” as well. The people that come in and out of the shop are from all walks of life varying from rich to poor and male and female.

I used the greater part of the day talking and having a good time with people that I have met at the shop from my previous times there. I go from the inside to the outside, standing in front of the shop watching the people pass by and checking out the scene. Every five minutes or so I get someone who screams “loose squares” or selling cd’s, dvd’s, purses, you name it you can get it there, hell one guy was given a trek 800 series bicycle for free. Now this is where thing’s start to change. Its starting to get dark outside and the “crazies” are starting to show up and show out. Outside of the shop we’re all chillin talking about life and about three doors down there is a congregation of “fiends” just hanging out with their kids talking loud, arguing on the phone, starting shit with people passing by in their cars on top of other various things.

Then out of nowhere, up pops one of the neighborhood “cluckers” just being herself dancing putting on a show. Now this is where thing’s start to bother me because she is acting out in front of all these little kids. For one the kids shouldn’t have been out there this late in the first place but look at where the parenting is coming from. Now the dancing is getting extremely raunchy for little kids to be seeing and they are out there right along with other lost souls cheering her on. I ran in the shop and grabbed my camera and came out and shot a few photos for the blog because I couldn’t believe how everyone was enjoying her make a complete ass of herself.

Some put blame on “the man” but this is a direct reflection of “WE” as a people contributing to the destruction of what our positive ancestors left for us to maintain. How can things change if your a willing participant? Not only are people dying by bullets but even worse they are dying from the lack of understanding that it starts with self first. PEOPLE IF YOU DON’T BEGIN SELF PRESERVATION NOW OUR KIDS WILL FOREVER BE LOST IN A WORLD WHERE THEY WONT BE ABLE TO SUCCEED BECAUSE OF THE EXAMPLES THAT ARE BEING SET! THE WORLD IS BIGGER THAN THE BLOCK THAT YOU HANG OUT ON EVERYDAY……….. GOD SPEED. 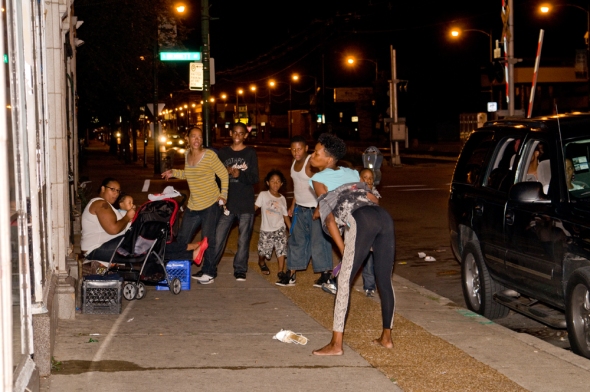 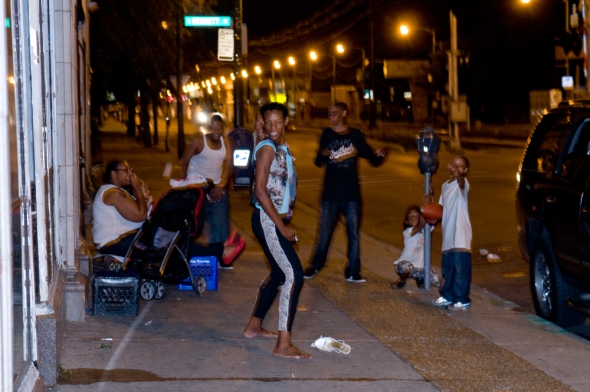 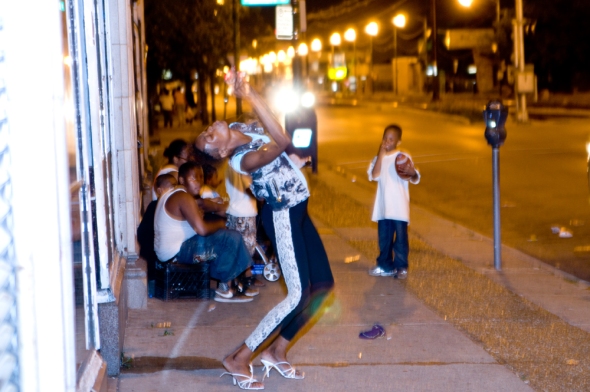 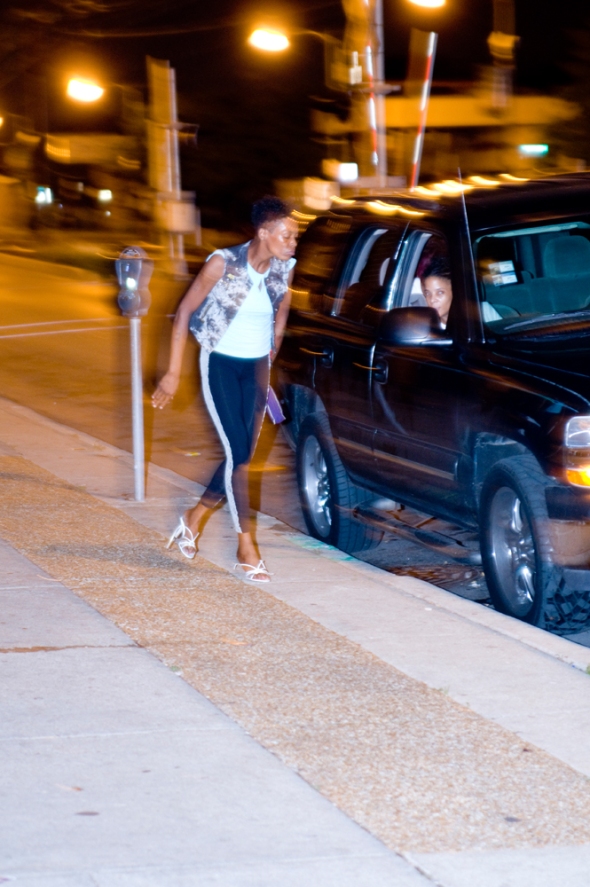 Living in Chicago is a very good thing for those of us that love it here. Some may dispute that New York or Los Angeles is better but when you Bleed hot dogs with no ketchup, Italian beef dipped with hot peppers, and Chicago style pizza who can top that? The fact that were broke bothers me because everything here is being sold to the highest bidder. I took a picture of Cook County Hospital not only because the architecture is AMAZING but also my life began there. This is one of those must have things to put in the photo album just because……….

Puerto Rico……. This ones for you!

In my travels around Chicago I had to stop and get a shot for all my “Ricans” out there. I was being looked at kinda strange and I had a load of beautiful women questioning me about my photography. In all it was a good time just standing there doing what I do.

Promote Your Page Too
I am a visual artist, I'm more than just a photographer.
Create a free website or blog at WordPress.com.